In September 2016 we launched nGen_FLEX during the TCT Show in Birmingham. This new semi-flexible 3D printing filament was very well received (see the initial reactions here). At the show we showed the use in the field of prosthetics and we also hinted at skin tone colors that were under development. Today we announce the availability of nGen_FLEX in five (5!) skin tone colors. These colors were chosen and developed together with several NGOs who are active in East Africa and the Middle East and with the goal to be able to meet local sensitivities in terms of printing prosthetics.

The colors are available are:

We based the colors on the Pantone color chart. Although very close to the Pantone references, these are not exact matches.

These spools are currently only available in our webshop and in limited quantities only. nGen_FLEX was released in September 2016 at the TCT Show and is our first semi-flexible material. With a Shore A hardness of 95 it is a material that is ideally suited for functional parts. It is not soft and squishy like other flexible materials in the market, but allows for fast printing and printing on 3D printers using a Bowden tube. It is made with Eastman Amphora™ 3D polymer FL6000.

nGen_FLEX is a material for users looking for an engineering grade flexible filament with a high temperature resistance (over 120 degrees C) and good chemical resistance. This makes it a very suitable material for prosthetics as shown on the pictures. 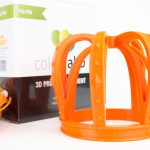