This week we attended the RapidPro for the fifth consecutive year. It was exactly four years ago that colorFabb started here at this very show and it has been a great ride ever since. We had a great three days in Veldhoven and thank everybody who visited us and took the time to have a chat with us.

Below is a visual recap of this year’s RapidPro

Our basis and business card. For the first time we positioned ourselves in the Industrial part of the show, showcasing not only our functional co-polyester filaments, made with Eastman Amphora™, but also the Stacker printer which we distribute as well as our new services like modeling for 3D printing, engineering and printing itself. The one factor that makes or breaks a show are the visitors. And we seem to get the best of them every show! Thanks everybody for dropping by. Featured printer in our booth this year was the recently launched Stacker S2 (available here and on Kickstarter). With two printers in our booth and one at the Mikro Centrum central booth it was easily the best represented printer of the show!  Interested in this printer? Contact us at sales@colorfabb.com The Moveo robotic arm was designed by BCN (and we teased it before). Entirely printed, even the belts, we were proud to finally reveal this project at the RapidPro this year, where it was part of the Mikro Centrum booth in the middle of all the action. And, of course, the full video of the robotic arm in action:

We had a blast during the show and hope to welcome you again next year. For everybody who couldn’t make it, we will keep the 10% discount on all our spools of filament for the remainder of this weekend (Sunday night midnight CET). Go to http://colorfabb.com/ and use coupon code RAPIDPRO2017 when checking out, or simply click here. 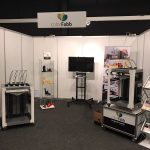 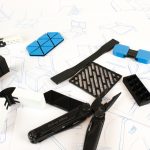