A pangolin is a mammal that is covered with touch, overlapping scales. These scales normally offer great defense against predators in the wild. This benign creature however is currently being threatened with extinction. They’re considered the world’s most hunted animal because people believe that the meat is prized for medicinal ingredient.

To get some attention for this little fella we have printed one. We challenged Niels, our new intern, with this multipart design to learn how to use the Ultimaker 2+ and our PLA Economy. It took him only a few days to get flawless quality from the Ultimaker 2+. This print was made on the Ultimaker 2+ with 0.1mm layer height, using PLA Economy Silver.

Designed by Amao Chan from Taiwan, who has a real heart for the little Pangolin. In Amao’s words: “Pangolins now are facing critical crisis as they are closing to extinct. In fact, humans are the murderers of this disaster, superstition and greed are the main reason to cause this massacre.” “Nowadays, the numbers of pangolins are less and less, some people eat them only for the reason of showing their ostentatious wealth, what they do to these helpless animals is to make them approach to endangered.”

About the design: “Pangolin is a really skillful and difficult work that I have spent a lot of time on it. It has been passed at least six editions before presenting to all of you. What I was trying to challenge is an artwork with both perfect appearance and function. It was a little struggle for me to share this work at the beginning since I’ve fallen in love with it when it’s first done and stood in front of me. At this moment, what I am wondering more is to let you firsthand it, holding and feeling the variation with actions. Enjoy and I believe you’ll like it.” Well, we like it a lot! For this print we chose PLA Economy to print with.

PLA Economy was launched November 2016 and it has been a big hit ever since. Only now we are catching up with the demand for this new and great filament! We have been printing quite a lot with our new PLA Economy line. A few examples are:

We have been testing this material for the better part of last year and have found this filament a great alternative those customers who need a lot of PLA. We are initially releasing PLA Economy in four colors: White (RAL 9010), Black (RAL 9005, Red (RAL 3020) and Silver (RAL 9023). This PLA grade has been tested extensively and is being produced and shipped by the same colorFabb team you are used to so you know we are not compromising on quality. You can rely with this filament on the same high standards that colorFabb is known for. It is available only on 2.2kg spools.

PLA Economy is an addition to our range of PLA/PHA, which is available in 30 colors (and on 750 grams spools). 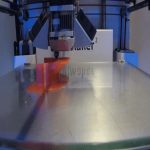 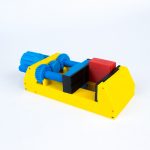