Our special filaments are perfectly suited for special occasions, like awards ceremonies. Last night was such a night and a special night for entrepeneurs in our region in and around the Dutch city Venlo, colorFabb’s home town. Every year the Lodewijk van der Grinten prize is awarded to a local entrepeneur or local business who has done something special for and within the city and the region.

Please note: links in this article mostly link to a Dutch language site.

This year there were three nominees: Cabooter Group, Scelta Mushrooms and Pulse Business Solutions. Being nominated is already an honor and all three nominees were awarded with a special trophy to commemorate their nomination. The trophy was custom designed and printed with colorFabb’s special filaments. The big winner of this evening, receiving the big award was Jan Klerken from Scelta Mushrooms for their work in R&D in the world of mushrooms! We congratulate Jan and his team at Scelta Mushrooms with winning this year’s award! The trophy for the nominees

A little bit about the award…

The Entrepreneur Award is named after Lodewijkvan der Grinten (1831 – 1895), founder of the current Océ. The name is not chosen without reason. Océ has become one of the biggest economic powers in Venlo and its region. The award is an initiative of the Foundation Lodewijk van der Grinten Business Award, in which LLTB Horst Venlo, Venlo Small and Medium Businesses (MKB), Entrepreneurial Venlo and the city of Venlo participate. It is handed out during a ceremony ever since 2010. The award is also made possible by sponsors, of which colorFabb is one.

The city if Venlo is located in the south of the Netherlands, next to the German border and in between the big harbors of Rotterdam and Antwerpen on one side and the German Ruhr area and Central Europe on the other side. Venlo and its surrounding region has been called one of the (if not the) best logistics hubs of Europe! With so much business in the area it is hard to stand out, which makes winning the award such an achievement! The trophy for the nominees was designed by Van Alles Wat Ontwerp. It was then printed by the colorFabb print lab team on the Ultimaker 3 using both bronzeFill and copperFill with a 0.2mm layer height – which dual nozzle system was especially suited for this task. It took 38 hours to print every trophy.

After that, we have post-processed the prints further by sanding the outer edges roughly and quickly. After that we used a polishing wheel to do the bulk of the polishing and finalized the print by polishing the details manually with some steel wool.

Check the video below for how the print was designed and printed (not in real time, of course):

Our special filaments have proven themselves to be quite award worthy, after seeing our woodFill, bronzeFill and copperFill have been used for the bioPlastics award only 2 weeks ago! You can read the post on that here. colorFabb’s entire range of special filaments are available in our webshop and through our network of distributors and resellers worldwide. If you are interested in post-processing the metal filled filaments, look no further than the article we wrote earlier this year about post-processing! But if you decide to look further, there is a nice collection of articles and blogs to be found here.

And remember, for the remainder of the year, because it is colorFabb’s fourth anniversary, we continue our Buy 4, Pay 3 promotion. Use coupon code colorfabb4you on our website to get the fourth spool you order for free! Some conditions apply though: cheapest spool is for free and samples and PLA Economy are exempt from this part of the promotion. Since it is less than two weeks before Christmas, don’t forget to order in time! 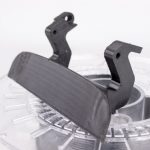 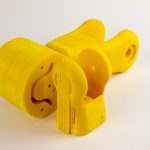