Replicas of historic church figures in wood by Fucco Design.The original figures were scanned by Scanning 3D; Fucco Design split the received model into parts and then had it printed, initially processed (separation of supports, etc.) and glued it all together.The sculpture was printed on Replicator 2, Ultimaker Classic and the company’s own 3D printer named Exxtrudo. The 3D printing layers were 0.3 and 0.1 mm – more detailed elements like the face and the hands were printed with higher accuracy (0.1 mm) while the other elements – with lower accuracy (0.3 mm). Each 3D printer performed about 1/3 of the work, however the largest portion was performed by Replicator 2.  The printing was fully made in Woodfill from ColorFabb. The elements were printed with a constant airflow at 230°C, with the table heating off, originally on a blue tape with a glue stick, and finally on Kapton covered with ABS juice.The printed figure is 153 cm high when assembled and is composed of 78 elements, each about 18 x 15 x 18 cm. The printing of the elements took 4 – 14 hours, on the average 8 h/element which totals 624 working hours (without including faulty elements by twisting of the elements printed on the tape). Some of the pieces that make up the statue. Look at how tall this thing is! Posing with your own 3d print, awesome! The completed statue looks amazing with all pieces in place. This is craftsmanship with 3d printers. 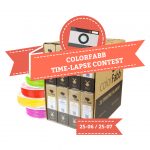 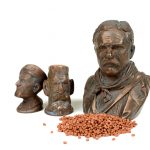